So I'm not feeling really great about this lent so far.  My plans have not gone the way I intended.  Last Friday I spent most of the day visiting with my parents when I went to pick up the little ones from spending the night.  Then I took the Middle Child to an afternoon/evening birthday party, it was 40 minutes from home so I hung out until it was over.  By the time we got home it was after 9:00, I thought it would be nice to spend a little time with the Director before I went to bed.  So, washed out day three.


Day four, over slept.  Took care of important stuff but shows no evidence of being done, such as lowering car insurance bill, talking over important stuff with the Director etc.  I did manage to make a plan for de-cluttering though.  I broke down the house into all the rooms or areas I wanted de-cluttered.  From there I broke the rooms or areas into specific things that needed de-cluttering.  When I was done I had 69 things that needed my attention, that is a tall order and I’m not off to a great start uugghh! 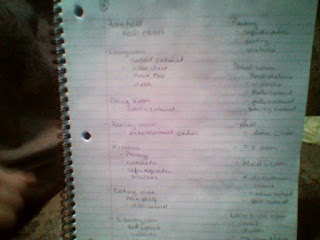 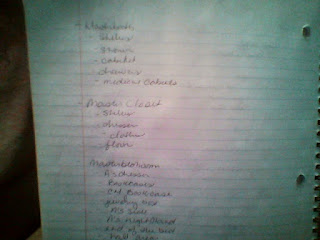 The only areas I did not plan to work on were Oldest room, the Organized Child and the Middle Child’s room, the Director’s night stand and armoire and the garage.  I figure those are areas that need to be maintained by the older people occupying those spaces.  I will encourage them to de-clutter as well but I’m not going to make them do it, as if I could anyway.  In the evening the Director and I went on a spur of the moment date and spent some much needed time alone together.  Day four another wash out.


Day five, I had planned to take Sundays off.  Even if I had wanted to work around the house on Sunday I couldn’t have, our day was slam packed.  Worked an omelet breakfast in the morning, at church to raise money for the older kid’s mission trip this summer.  Took the Informer to a birthday party in the afternoon, swapped off with the Director, went home to put dinner in the crock pot and head back out to go to mass.  Got home after 7:00 because Oldest is taking drum lessons in order to take over playing the drums at the youth mass after our current drummer moves in April.  Ate dinner and watched a family movie together with the kids before heading to bed.  Day five, supposed to be a day off but another wash out.


Before I went to bed I was reading a few things on-line and doing e-mail.  I had promised to send a link from my blog to a friend.  While on the blog looking for the particular post, I came across a post I had written last year during lent   HELP! The Water is Encircling Me, Pulling Me Down!   I re-read it and I was reminded of a wonderful thing.  In the post I had quoted one of my favorite author’s blog Ann Voskamp, here is what I posted.  (Obviously this getting off on the wrong foot is a pattern in my life.)


Today I read a wonderful post from the blog that really jump started my desire to blog, A Holy Experience.  It was titled What to Do When You feel like a Loser… let me tell you it hit me right between the eyes!  It was just what I needed!


My lent has not gone according to my plans this year.  I love where Ann says


“Whoever had the crazy idea that Lent was for the good who were forsaking some lush little luxury?  Lent’s for the messes, the mourners, the muddled — for the people right lost. Lent’s not about making anybody acceptable to a Savior — but about making everybody aware of why they need a Savior….  “See how these fingers can angle — how they can bend in surrender to Him.  And if you lay the other index finger across, pick up your cross and follow Him– there it is — there’s the sign to wear, the sign showing the way out of a mess: “A” – amazing.  She has to know this, that the word, “amaze,” it comes from the act of wandering in a maze, to be bewildered, overwhelmed with wonder — amaze.  The losers, the ones lost in the labyrinth of life, are the ones made amazing – by the One who solves the mazes of life.  I touch her cheek, “In Him, you are already amazing.”  She blushes and I laugh, nod my head yes, insisting to this daughter who has to know her Father’s heart for her now because of the Son.  “In the flesh, you’re a mess.  In Christ, you amaze.”  I sign the “A” over her and Christ with the scars, He marks her.  “You’re already amazing.”


I imagine she’s speaking straight to me!  Words I so needed to hear!  The losers, the ones lost in the labyrinth of life, are the ones made amazing – by the One who solves the mazes of life.   “In Him, you are already amazing.”  To know He will solve the mazes of life.  To know that in the flesh I AM an ABSOLUTE MESS!  But in Him I amaze.


As I’m feeling like a loser for not getting a better start on lent this year, I was gently reminded that I am a mess without God.  And, even though my lent hasn’t gotten off the way I intended, I have definitely been more focused on God and spending time in His presence.   I have been intentionally trying to have a better attitude towards everyone in my family and the mess in my life.  It’s been going fairly well considering who were talking about here.  So, maybe it’s not exactly as I have intended but I do know I’m being worked on.  I know that I am growing.  And today is a new day I can definitely always start anew.  We’ll see what I accomplish today.
Lent