February 14, 2013
Yesterday I didn’t get a huge jump on the house because it took me most of the day to figure out that I was absolutely sure that my Lenten sacrifice journey would in fact be de-cluttering, organizing and cleaning our house.  So, after I finally decided the following took place:


1)       I got rid of seven bags of stuff and a port-a-crib.  I’m not entirely sure that I will count this in my 40 bags, as the bags were already packed up and ready to go.  They have been in my living room for quite a while so on one hand they are now officially gone from the house, hopefully blessing someone else.  However, on the other hand I didn’t actually gather the stuff during lent.  We’ll see where I stand at the end of lent as to whether or not I count them.

I scheduled a pick up at our house on-line, put the bags on the front porch, clearly marked, and waited for the VVA to pick them up.  Good thing too, as I found out yesterday that my local Goodwill branch closed uugghh!

2)       I forgot to post yesterday, another blog post I read concerning using everything you have in your pantry and spending minimal money on food throughout lent then donating the rest.  Of course now that I want to share it with you I can’t find the blog.  It’s not in my history and it’s not coming up in Google.   Anyway, the gist of the post was to use what is already in the house to make meals throughout lent plus a $20.00 a week food allowance.  Then donate the rest of your food money to the poor.

As a Costco, Sam’s, BJ’s, sale/coupon person our pantry, fridge and freezer are almost always full.  However, because some of the stuff I have bought in the past didn’t get eaten fast enough and went bad; then, when my husband lost his job last year we ate a lot of what we already had in the house, my pantry and freezer pretty much looks like Mother Hubbard’s right now.  Still, I did have a bunch of half used bags of frozen veggies and stuff in the crisper close to going bad.  So, I decided to make this soup for Ash Wednesday dinner, Kitchen Cupboard Soup .  I threw in all kinds of frozen and fresh veggies that were very close to the end of their freshness.  I had an envelope of French onion soup mix, a veggie bouillon cube, some Cabernet Sauvignon wine that my husband wasn’t too fond of and a bunch of spices that I added as well.  The soup ended up being so good that it almost felt wrong to eat it on a day of fast and abstinence.  I added a hearty whole grain bread loaf and fresh strawberries to complete the meal for the kids. (I actually have so much left over that I’m going to freeze a batch for Good Friday as well.) 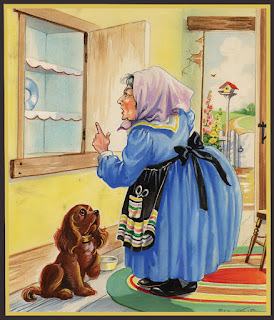 It felt really good to use up stuff that we already had in the house, and it felt equally as good to prepare a healthy home cooked meal for my family.  I was amazed at how well it turned out. While my cupboard is still pretty bare, there are things that I can use up in my freezer, I plan to do that as well.

Not a huge amount accomplished but I’m focusing on self-denial as well as Proverbs 21:5, “The plans of the diligent end in profit, but those of the hasty end in loss.”  Praying my offerings are pleasing to God.
Mother Hubbard Old English Nursery Rhyme
cooking decluttering Lent