I have written on my blog about the heroism of and my admiration for the Organized Child's godfather.  I was in awe as I learned even more about his bravery and heroism at his funeral.  I had an admiration (and still do) for the Godfather because of his patriotism and devotion as a man, father, grandfather and soldier.  However, I am ashamed of my lack of admiration for another man who deserved it just as much as The Godfather did.

For years growing up I heard the story of my grandfather's heroism, but that's all it was, a story.  A story that went along with a picture of a handsome, young, man that hung on the wall. 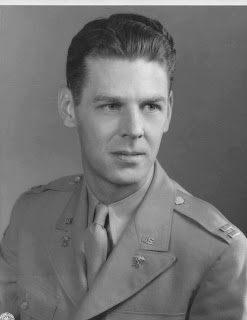 The story was never quite clear and seemed to have a few variations.  I knew that he had died saving some men in a fire.  What I took away from the story was the devastation and pain it had caused my grandmother, aunts and mother because he had died.

After my grandmother died I learned a little more about my grandfather and decided that I would like to name my first born son after him, in honor of him.  Naming Oldest, was the extent of my interest.

Three years ago several coincidences started an investigation and a research project into the events leading up to my grandfather's death.  Again, I followed along with what I would consider an apathetic interest.  Not because I wasn't interested or didn't care, but because it was still just a story to me.  I know this man lived and affected lives but for whatever reason it wasn't "REAL" to me.  He wasn't real to me.

Finally after three long years and lots of hard work, a monument and memorial service were planned for yesterday at Fort Drum.  It wasn't the ideal time for me to travel and one thing after another seemed to impede me from attending.  I had ideally wanted my whole family to go and when it didn't work out, I thought I would just skip the whole thing.  Finally, The Director encouraged me to go and my most generous aunt paid for The Middle Child to go with me.  After venturing out for an over night trip with The Middle Child, we again ran into several road blocks.  Those blocks almost discouraged me enough to get back on a plane and head home before I even arrived at my final destination.  I am so glad that I didn't go home, that we endured and finally made it to Watertown NY to be present for the momentous occasion!

Yesterday I learned about a most amazing man, my grandfather, an Officer in the US Army in 1947!  He was a hero who changed the course of history.  I will never know the amount of lives he affected by his act of heroism.  He suffered tremendously because of his selfless act of courage.  While his act was not a game changer for the masses, it was for ten men.  (Sitting there yesterday I was reminded of The Star Thrower by Loren C. Eiseley.)  And, while my grandfather didn't die in combat, he still died serving his country, saving men he more than likely didn't even know.  Because of the fire that claimed my grandfather's and four other men's lives, and some events that followed, the Feres Doctrine came into place and is still referred to in court cases today.  This fire and his life, are a very important part of history that was almost completely forgotten.

My grandfather arrived at the base only nine hours before the 2:30 a.m. barracks fire broke out.  He is credited with saving the lives of 10 men after he sounded the alarm and searched the barracks to help all of them escape.  Trapped by the debris while attempting to jump from a second story window, my grandfather suffered burns to approximately 90 percent of his body, and later died 18 days after the fire with my grandmother at his side.

I am so grateful I was able to attend yesterday's memorial.  I am grateful to all the people at Fort Drum who investigated and researched this event, to learn what they could, and bring the story of the handsome, young man, in the picture on the wall, to life.  I am in awe of the man who gave his life, so selflessly and courageously.  Who fought to stay alive for 18 days, I'm sure for his wife and three small daughters.  The man who died at just 25, but seems to me must have been wise and mature beyond his years.  A successful, accomplished and decorated soldier.  The man I never met, but named a child after.  The one I now call my grandpa. He is no longer just my "grandfather", the handsome, young man in the picture, who had a brief, unclear, lore attached to his name.  He is my hero! 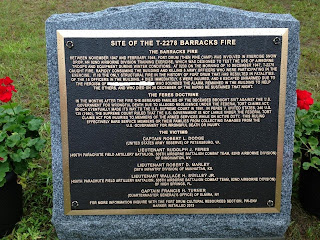 And, I am so proud of my mother and my aunt for their part in bringing this event to being and persevering all of these years without their father.

While I am EXTREMLY proud of my grandpa and his heroism, it is IMPORTANT for me to keep the anonymity of my children and family.  This is the ONLY reason I have blocked out my grandfather's name on the picture of the monument, placed where the front door of the barracks was.
Fort Drum Heroism. Feres Doctrine