More Thoughts from the Cobwebbed Corners of My Mind

January 05, 2012
I’ll admit this has nothing to do with faith family or homeschooling, but like the whole Human Directional thing, this is one of those things that has me perplexed and sometimes annoyed.

The Director, Oldest, The Organized Child, my parents and I recently went to see the play Screwtape Letters, an adaptation of C.S. Lewis’s book The Screwtape Letters.  (An excellent play, if you should get the opportunity take the time to see it!)  So here’s the thing, ten minutes before curtain call I decided to go use the restroom.  I walked out of the theater, to the restroom, saw the line and proceeded right back to the theater.  The line was so long that it wrapped out of the restroom alcove and almost back to the door of the theater.  No granted the theater isn’t huge but there had to be at least 25 women in line. 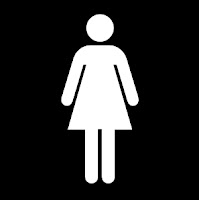 I have found no matter where you go there is always a very long line for the women’s room while men come and go very freely and quite often.  I want to know who designs public restrooms?!  I have yet to find a really acceptable public women’s restroom in terms of size, enough stalls, location of the toilet in the stall and layout.  The closest, acceptable, restroom that would pass in my book as far as enough stalls and placement of the toilet in the stall, would be Oprah’s restaurant in Chicago, and honestly I don’t’ even know if it’s still open.  I went there once with some friends in the late eighties.  The restroom had floor to ceiling, wood doors on each stall.  The toilet was centered in each stall nicely, allowing enough room for you to sit on the toilet comfortably, without hitting your knees, or something else on the toilet paper holder or feminine hygiene trash can that usually hangs on the wall.

At the beginning of December we took the kids to a movie in the park, The Little Man, who is potty training on his own time, decided that he needed use the restroom.  I walked him two blocks to a Panera Bread Restaurant where we, a pregnant woman, and several other women waited in line for almost twenty minutes.  In the mean time several men came and went, as did two women, from the men’s room.  By the time we got in the bathroom The Little Man had wet his pull up and the pregnant woman was pretty close to following in his shoes.

My observations when it comes to public women’s restrooms are as follows:

Clipart from Clker.com
I think someone should really rethink the whole design thing when it comes to women’s restrooms.