June 20, 2012
I live in a house with five kids, a dog and a cat.  All of my children were blessed (or maybe it’s cursed) with one of the Director’s genes in particular, this gene makes me crazy.  It’s called the “rough, hard, break it, destructive” gene.  The dog and the cat are particularly sturdy animals; they have to be in order to survive our house.  Therefore, they too were endowed with a “rough, hard, break it, destructive” gene.

Yesterday, I tried to perform a very simple task; it should have taken no longer than a few minutes.  I wanted to download an audio book to my NOOK for The Middle Child, she has a concussion and needs to be resting, doing quiet tasks.  Normally the longest part of this undertaking is finding the book you want to listen to.  Not so in this case.  I found the books, downloaded them to the computer in record time.  However, when I went to connect my NOOK to the computer no dice!  UUGGHH!  OK, try again, and again and again!  Repeated attempts before bellowing for Oldest to come help me!  After a cross-examination in a condescending tone from him, we get NO WHERE!  Never mind, I’ll call the Director!  Conversation with the Director follows the same grilling suit I just had with Oldest.  UUGGHH!  Never mind I’ll figure this out myself!

The Director did inform me before we hung up that the USB port in the front of the computer is broken; if the other two ports on the printer or hard drive don’t work try lifting the plug in a certain manner and it might work.  “You’re joking? Right?” I think to myself, you’re a Senior IT Director and this is your solution?!  I’ve said it more than once, thank God I’m not married to a plumber or I wouldn’t have a working toilet in the house!

Finally, after numerous attempts and with The Organized Child driving the mouse we managed to get the whole book onto my NOOK.  This was only after I stood on my head, held my nose, fully exhaled, closed one eye and hummed Dixie while I held the plug in just the right place of course.  After I delivered the NOOK to The Middle Child in bed, I exhaled deeply and dropped my shoulders.

Of course I didn’t handle the situation well, no poise in me, at all, again this time!  I ranted, I raved, I cursed and swore, I yelled at the little ones, Oldest and The Director.  “Just once I would like to see something go right!  Just once I would like something easy to go easy!  Why is everything in this house broken?!  Can’t we have anything in this house that isn’t broken?!  Why do you all have to break everything we have?!  Why?  Why?  Why?” and the tirade went on and on!

When it was all said and done, I felt like I had just done battle with a dragon!  Such an ordeal for something that should have been so easy, and not one ounce of grace came forth from me!  As I went to the kitchen to make lunch all the broken things in my house were reeling though my head.  I stewed, everything is broken, or marred in some way, and I went through the list in my head:  dishwasher – check, sink – check, cabinet – check, and the list went on and on and on.  I finally surmised that I live in a BROKEN HOUSE!

Then in my head, I heard quite clearly “Yep, you sure do, it’s the perfect place for a broken person.”  Now I don’t mean that it was a condescending your broken and no good.  No, it was your broken, you have past hurts and sorrows and pains that need healing and love.  I began to think, what if I didn’t live in a broken house with kids who didn’t have the “rough, hard, break it, destructive” gene?  What if my house looked like something from Southern Living?  Would I be able to relate to a God who fixes and mends broken hearts and sorrows?  Would I understand Him to be a Father that takes the broken toy and repairs it?  Or takes the drooping flower of a sick child, like George Bailey does and makes it better?

Truthfully, I can relate to George Bailey in a lot of ways lately!  (When I think of the post on the stairway, frankly I’d rather fix it like Clark Griswold than kiss it like George Bailey.)

Maybe like George Bailey I’m getting a second look at my life, not with the guidance of an angel but through the mess and brokenness in our house.

I love the line in Parenthood right before Grandma’s roller coaster story.  Gil has just found out his wife is pregnant with their fourth child.  They are going back and forth, Gil is focusing on all the negative what ifs, Karen asks Gil “what do you want guarantees?  There children not appliances”, then she tells him, “Life is messy”.  He replies “I hate messy.  It’s so messy!” 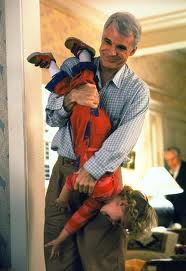 I hate messy too!  I hate broken things and mess!  Maybe because it reminds me of the state of my soul and being.  But, what if my outer life wasn’t’ broken and messy, would I even begin to realize that my soul was broken and messy?  And, if I didn’t know would I be concerned enough about my relationship with God to work towards deepening that relationship with Him?  Would I need Him?  Because right now I NEED Him!  I desperately NEED Him!

As hard as it is to admit, maybe I am right where He wants me to be.  Because, I know with every fiber of my being, that when things are going really good in my life God is not in the forefront of my mind!  I rely on ME and I think that I am in control; I have on my rose colored glasses and see life as only I want to.  But, when things are not going according to plan after my pouting its Him that I turn to, Him that I cry out to, He is the one who I need.  I can’t do it without Him, why I can’t get that through my thick skull, is beyond me?!

Last week I helped to direct VBS at our church the theme of the week was Trusting in God.  Each day brought a new Trust God Bible Point, overall the theme was No Matter What…Trust God!  I’m a slow learner, but I am learning that through the mess and brokenness in my life I need to trust God no matter what!  Even if I am standing knee deep in mess and broken things!