Match! Can I Get a Match Here?!

March 19, 2012
I’m not a big fan of Barbie dolls.  While my daughter has a couple of them (given to her as gifts), I personally think the unrealistic bodies of Barbie dolls, all the extreme accessories (houses, sports cars, RVs, spas etc.), and the immodest clothing can be damaging to a little girls self-esteem and create unrealistic views about life.  I did like the pregnant Midge doll, Barbie’s friend, which was reintroduced with a pregnant tummy and newborn baby.  While I’m not sure how Mattel feels about this and I know this doll created a lot of controversy, I looked at the doll as a pro-life and pro-mommy endorsement.  With that said I don’t want you to think I’m down on little girls playing with dolls, fantasizing about growing up or role playing.  I just feel that little girls need positive and more realistic role models.
﻿﻿
﻿﻿

I am a much bigger fan of Get Real Girl dolls.  “The dolls are made to look like real girls, to act like real girls and to let real girls know that there is more to growing up than wearing tight clothes, lounging by the pool and finding a fraternity-bound boyfriend.
Jana Machin, president and CEO of the company, explains: "they're about a lot of things, but the important thing is that they are designed for today's girls. They play sports, they are active, they are interested in travel. They have pets.””.1  Unfortunately, the company isn’t in business any more, which really frustrates me as I think they are great role models for little girls!  Every now and again you can get them on eBay along with accessories.  If you have little girls I highly recommend them.

Anyway, to get to the point of my post.  In our house, lots of toys and clothes are passed down.  The younger three kids sadly, have gotten mix matched things, worn out things and in the case of the Get Real Girl dolls some broken things.  Despite some of our Get Real Girls only having half an arm or leg and the manly, sportsman, Ken/G.I. Joe style dolls I bought, are missing appendages they are played with quite often.  In our mix of mismatched dolls and clothing there is also a Jessie (from Toy Story 2), Barbie style doll and a Captain Jack Sparrow Barbie doll.  While my girls prefer to re-dress the dolls repeatedly and only role play with them occasionally, The Little Man loves to dress them minimally (I think mainly because he doesn’t quite have the dexterity mastered yet and it’s difficult for him) and role play much more. 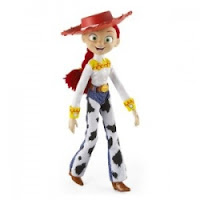 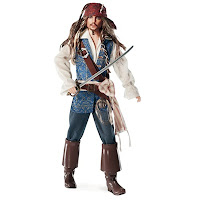 The other day the three youngest were playing very well together, for a fair amount of time with no bickering or being loud*.  They were playing with the Get Real Girls and other miscellaneous dolls.  Dressing, re-dressing, bringing them to me to show me the new outfits they had created and a little bit of imaginative play.  I was relishing in the little bit of peaceful time this allowed me.  I was doing something for myself, but I stopped every time they brought me a newly accessorized doll, I would OOH and AAH at what they had created and asked questions about where the dolls were going etc.

After awhile The Little Man comes in carrying not a man doll, his usual choice for play, but one of the Get Real Girl dolls.  She was dressed in a helmet (one of the man dolls accessories), her bra and underwear (another reason I love Get Real Girls, their underwear is painted on, they are always modest!), and Captain Jack Sparrow’s knee high boots.  She was carrying a picnic basket in one hand and a baseball bat in the other.  He held her up high for me to see.  He was beaming from ear to ear, proud of what he had accomplished, dressing this doll.  I commented on what a great job he had done with the boots, helmet, and baseball bat and picnic basket.  But, I had to ask where her clothes were.

So there is something I feel I need to share before I give you his reply.  Over the years of child rearing, baby-sitting and being around my siblings I have made some observations.  One of them is, that most kids, regardless of how they are being raised, and what their influences are, have there own ideas and opinions on things.  My stuntman brother decided early on in his career (three or four years old) that shoe laces in shoes and overalls were for babies.  Therefore he REFUSED to wear overalls and took all the shoe laces out of his shoes (this is pre-Velcro days people!).  Like the Stuntman, The Little Man who is almost four has his own ideas on clothing and style.  He has this immense need to match everything!  His clothes, his eating utensils, school work, sheets, whatever.  Sometimes he truly can match things for himself well.  While other times, his idea of matching is so far off, he looks like an old golfer, with Phyllis Diller’s sense of style. 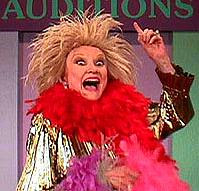 Where this attitude came from I have no idea. Unless we are going to church, and even that has a lot of leeway, I have never pushed any of my kids to match or be perfectly dressed.  It is much more important to me that they have a sense of accomplishment by picking out their own clothes and getting dressed themselves, than it is that they match or look perfectly pressed.  I know many people would disagree with me, but I feel it is important to build up there self-esteem and individuality early on.  My only concerns when it comes to clothing are, that it’s modest and that they don’t look like Pigpen.  So, this obsession with The Little Man’s “matching” is a little odd to me.

Back to the Get Real Girl dressed in a helmet, her bra and underwear and Captain Jack Sparrow’s knee high boots, carrying the picnic basket in one hand and a baseball bat in the other.  I looked at the doll and asked “So, Bud, I like her helmet and boots, but where’s the dollies clothes?”  He looked at me, as if the answer was so completely obvious and replied, “I not find an outfit to match da helmet!” and went on his merry way.

Now there is nothing wrong with matching things, and looking nice is important but when it gets in the way of life it can turn into a problem.  The Little Man has had many a break-down over having to wear something or use something that he sees as not matching.  And, in the case of the doll, it is only a doll and he is only three but at some point he needs to learn that going out in a helmet, bra and underwear, knee high boots, carrying a picnic basket in one hand and a baseball bat in the other, just isn’t acceptable.

As I think about him and his attitudes, I begin to wonder if God isn’t using The Little Man yet again to teach me something important.  I wonder, do I have attitudes that seem mostly innocent and quirky, but because of my strong attachment to them, they get in my way?  Do I have attitudes that could turn into inappropriate beliefs down the road?  What attitudes or beliefs, right or wrong, do I have that are holding me back or hindering me from receiving God’s eternal love, blessings and grace?  I certainly know I can throw a tantrum or pout because I think something should be done a certain way or because I think my friends or family should change their attitude and beliefs to be in line with mine.  Am I missing out on relationships with others and a deeper relationship with God because of this?  I have to wonder how much better off I might be if I would let go a bit, give in some and be open to God showing me how to truly “match”!  After all it says in John, chapter 3 verse 16 “For God so loved the world, that he gave his ONLY begotten Son, that whosoever believeth in him should not perish, but have everlasting life.” (Emphasis mine)

If God loves me like Augustine says “God loves each of us, as if there were only one of us.”  Shouldn’t I trust that He knows what is best for me right now in my life?!  Why do we get so attached to our ideas and attitudes?  Why is it so hard to just let go and let God?  I truly hope that God will call me OUT when I bring a half naked Barbie doll to show Him and when He asks where its clothes are I say “I not find an outfit to match da helmet!”

*We have a plaque in our home that reads:
In Our House
We do second chances
We say prayers
We do I’m sorry’s
We do loud really well
We give hugs
We do love
We are family
And boy do we do loud REALLY well!